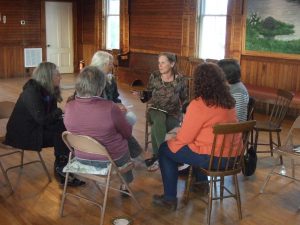 The Canton (Maine) Historical Society invited Jane Woodman and Rob Lively to give a workshop on “Preserving Your Family History through Storytelling.” They received the highest praise possible from a New Englander: “This was better than I thought it would be.” 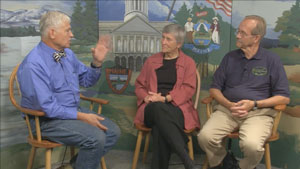 Western Maine Storytelling received grants from the Maine Humanities Council and the Tri-Valley United Way in 2017 to advance storytelling in four communities: Livermore Falls, Wilton, Farmington, and Rangeley. It is with gratitude and thanks that we recognize and applaud the support from our Great Community!

A storytelling workshop was offered in each community—helping participants mine their own family stories—followed by a second session where seasoned storytellers and those from the workshop shared personal and family stories. The goal was to encourage face-to-face communication through stories; the fear being we are so engaged in our computer and smart-phone screens that we are losing the art of communication.

Peggy Yocom– Storytelling Workshop: “How to Recall and Tell Our Family Stories”
Storytelling Swap: “Sharing Our Stories: A Community Celebration”

“A Community Celebration of Stories.” The Landing, Olsen Student Center, University of Maine at Farmington. Follow this link to read an article about the workshops hosted by Western Maine Storytelling http://www.dailybulldog.com/db/arts/storytelling-workshop-is-may-18/

Sponsored by Western Maine Storytelling through grants from the Maine Humanities Council and United Way.

“What Good Is Story? Telling Tales in Uncertain Times” at the University of Maine at Farmington. Stories – folktales, legends, personal stories, and more – contain unsuspected depths and powers. Folklorists and storytellers Jo Radner of Lovell and Peggy Yocom of Farmington discussed with audience members how stories work on multiple levels, how our human brains are wired to think in story form, and how knowing about story and storytelling practices can serve us now—as charges of “fake news” fly back and forth daily. The talk is free and open to the public.
This event was a part of UMF’s interdisciplinary “Storyfest,” a year-long exploration of story and storytelling. Thanks to Dr. Steven Quackenbush of Psychology and his UMF colleagues who have made this series – and Peggy and Jo’s participation in it -possible.

Western Maine Storytelling presented at the Webster Library, Kingfield
Marvels and Mysteries: Stories from the Mountains of Maine

Western Maine Storytelling presented an evening of stories at the Rangeley Public Library, Rangeley, Maine. It was generously Free and open to the public. Entitled “Marvels and Mysteries: Stories from the Mountains of Maine,” the program featured the following Maine storytellers:

Some Mainers still remember and, in fact, cannot forget October of 1947, when, after a season of terrible drought, wildfires burned all over the state.  Brownfield was one of the worst-hit areas: 80% of the town, including all churches, schools, post offices, and other public buildings, was completely destroyed in the space of a few hours.

In the face of the fire, Brownfield residents responded with courage, care, and even—in a few cases—obstinacy, like that of retired schoolteacher Mabel Stone: “She had her little dog Woofie with her, and she had a plan: she was going to stay at her house and fight the fire with a broom, a bucket of water, and a snow rake.”  Facing the devastation after the fire, neighbors ingeniously made do, shared what they had, and rebuilt what they could.

Jo Radner spent a year interviewing people who experienced the Brownfield Fire—residents who did and did not lose their homes, as well as others who aided in the rescue and rebuilding effort.  From those interviews as well as from letters and historical photographs and newspaper reports, Jo has created for Brownfield a powerful story of terror, courage, neighborly responsibility, recovery, and – yes – even humor.  Maine storyteller and author Michael Parent has called “Burnt Into Memory” “a tremendous story for our time, a story of hope and connectedness between humans at a time when hopelessness and disconnectedness are the rampant order of the day.” 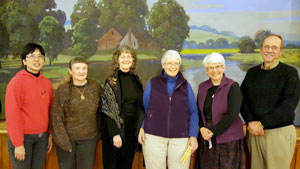 By linking the stories to his tribe’s modern day meanings, the audience will enjoy these Wabanaki stories that give us a glimpse into the cultural values of Maine’s native tribes.  These same teachings are important and still hold relevance in the daily lives of contemporary Wabanaki.  The stories seek to explain, educate, and reflect on the basic principles of life and taking care of our own.

Mitchell is a member of the Penobscot Nation on Indian Island in Maine.  He presently serves as the Associate Director of the Wabanaki Center at the University of Maine in Orono and University of Maine Native Program Waiver Coordinator.  His singing and storytelling can be heard in many Maine PBS programs, tribal-sponsored awareness videos, and other documentaries with topics on Maine’s Native People.

Presented by Western Maine Storytelling, providing a free morning program for children at the public library, and an evening program for adults at the Emery Community Arts Center.

Stories from Asia and Africa – presented by Motoko and Esau

Two nationally acclaimed storytellers join forces to help communities celebrate diversity of cultures through world folktales, original narratives, and music. Eshu, a winner of the Storytelling World Award, specializes in tales and songs from Africa and the Diaspora, leavened with humor and mystery. Parents’ Choice Award winner Motoko blends her hilarious and poignant tales with exquisite mime movements. With nearly 50 years of combined experiences performing in schools, libraries, theaters, and festivals, Motoko and Eshu offer a unique collaboration between cultures, entertaining audiences of all ages. – http://www.folktales.net/

Storyteller, mime, and actor was presented by Western Maine Storytelling the summer of 2014, providing a free morning program for children at the public library, and an evening program for adults at the Emery Community Arts Center.

Both were very well received as Antonio shared vibrant and animated stories that draw from personal life merged with the lore and mythology of traditional story.

“I strive to use my talents as a mime and storyteller to illustrate lessons from different aspects of life. Using the versatile yet simple nature of these art forms, I bring the audience and workshop participants to activate their imagination through rich symbolism and imagery.” – Antonio Rocha

For more info about Antonio:www.storyinmotion.com

Other past events and story tellers include: